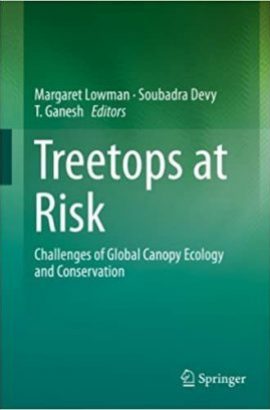 Treetops at Risk: Challenges of Global Canopy Ecology and Conservation

“Treetops at Risk” brings together the world’s foremost experts on forest canopies, and summarizes their views on the current and future status of forests. Forest canopies not only support high terrestrial biodiversity but also represent a critical interface between atmosphere and the earth. They provide goods and services to support humans, and represent important energy production centers for the planet. Millions of people depend upon forest canopies for their livelihoods, and millions more depend upon future sustainable use of forest resources. The canopy also serves as a hook for education outreach and conservation, inspiring ecotourism and recreation. Despite these critical services provided by forest canopies, very little dedicated research in the treetops was initiated until as recently as the late 1970s when single rope techniques were adapted for use in the canopy. Subsequently, an array of canopy access tools was designed that have opened up this “eighth continent” for global exploration and discovery.

In 2009, the fifth International Canopy Conference was held in Bangalore, India, representing the first time that canopy researchers had convened in a developing country. Not only did this conference jumpstart canopy initiatives in India, but it fostered a broader approach to critical canopy issues facing many emerging countries where forest resources are seriously in decline. Despite the global efforts of hundreds of forest scientists over the past 3 decades, forests are degrading at an accelerated rate and canopy biodiversity is increasingly threatened by human activities. Given these trends, new and innovative approaches must be taken. This volume summarizes the issue of “treetops at risk” and assembles a global authorship to examine past accomplishments and future initiatives critical in forest conservation.